Today wasn’t a whole heap of fun. Work is still far too busy, and I am trying to do a full week’s work in just two days at present, as we are on the shoulder of the breeding season, but not slowing down much. Uni is two days per week (where I have to physically be on campus) but have just been called in another day per week for a compulsory departmental graduate student and faculty meeting.  I have had to quickly design a small research project, and spent the entire weekend researching, and writing an ethics application. Submitted to my supervisor, and she was very encouraging, and suggested a couple of smoothing tweaks to help. I got to these tonight, and am finally finding a moment to breathe a little.

During the day, my colleagues were on their lunch break. We work in equine reproduction, and the conversation is often pretty agricultural. My boss is my age, with a PhD, and is a board certified specialist in Veterinary Reproduction. The two permanent staffers are in their mid-20s. The conversation today started with the stud manager talking about her dear friend who is just dating a new guy after an appalling time. She had been going out with a man she adored for several years, they had just decided that they were going to start having sex using a different method of contraception than condoms. They went off and got STI screens and both came back clean. Not long afterwards, the woman found she got a terrible genital infection, and went to her doctor to find that she had herpes, warts, chlamydia and gonorrhea. Yup, quadruple whammy. She was in agony, and Ellen, my workmate, said she was with her when she was in so much pain, she couldn’t pee, and had to do it over/in a bathtub. She just wept and said to Ellen, “look at my vagina! It’s a pulverised, disgusting mess!” The guy swore he hadn’t cheated. Turns out, he not only had unprotected sex, but he did it on a sex tour in Thailand! Fucking arsehole! This poor girl was in agony, not just physically, you guys know the rest. Ellen was worried about her friend’s ability to re-partner (yes, she kicked him to the curb, of course) with herpes, and how she would have children if she was shedding during pregnancy, etc, etc, etc. The other girl we work with, a friend of Ellen and the girl in question, was gobsmacked, horrified and completely disgusted. Our boss, the vet, was all, “oh, that poor girl…” Meanwhile, the discussion went onto , “OMG, who the hell would do that? What a complete fucking arsehole. That poor, poor girl.” I sat there, rooted to my chair. What the hell could I say? “Oh yes, it happens to so many of us. After three kids, in your 40s, having only ever slept with one man – the love of your life, the man you trusted with every atom of your being – it happens ALL THE TIME. No biggie!” But no, instead, I sat there trying not to burst into tears, trying to swallow the bit of vom that kept sliding up my throat. My boss knows my situation with the cheating partner (whom she knows and likes, but she gets it, she was cheated on by a fiance back in the day.) But, of course, I haven’t told too many people about the HPV and chlamydia. Another part of my life I am OH SO DAMN PROUD OF. 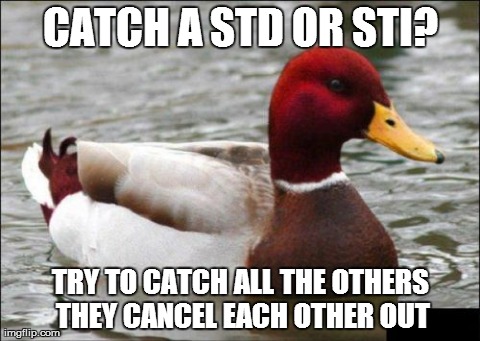 So, tonight, after being fairly quiet, Rog asked me how my day was. So, I told him what happened. And how I fought tears and/or running from the office screaming. Do you think he said anything? Did anything? Oh, you fools, don’t be so silly! He just sat there.  Later, he said, “what do you want me to say?” Well, dumbass, if I have to tell you…. I don’t have a script. I don’t have the right words to SAY. But he could have said something like, “oh, that must have sucked for you.” Or, “Poor girl, men can be such scumbags.” Or, anything at all.  But instead, he just got defensive and said, “it’s not the same thing.”

How is it not the same thing? You put your naked cock in a diseased whore. Lots of times. And your fingers. And your tongue. Probably your big fucking TOE! Pretty much every part of you that you could fit in her. Naked. And so did the other arsehole. Yes, you are SOOOO much better than him. Keep telling yourself that. Someone might believe you one day.